Lively and energetic: Our review of The Tiger Who Came to Tea

We were invited to review The Tiger Who Came to Tea, currently showing at the Theatre Royal Haymarket. It was a lively and energetic show, and perfectly pitched at the younger theatre goers. I took my six year and and 18 month old, who both enjoyed the show and had a great time.

It is showing in London until 19th January 2020, and then touring UK - more information and tickets can be found on tigerstealive.com 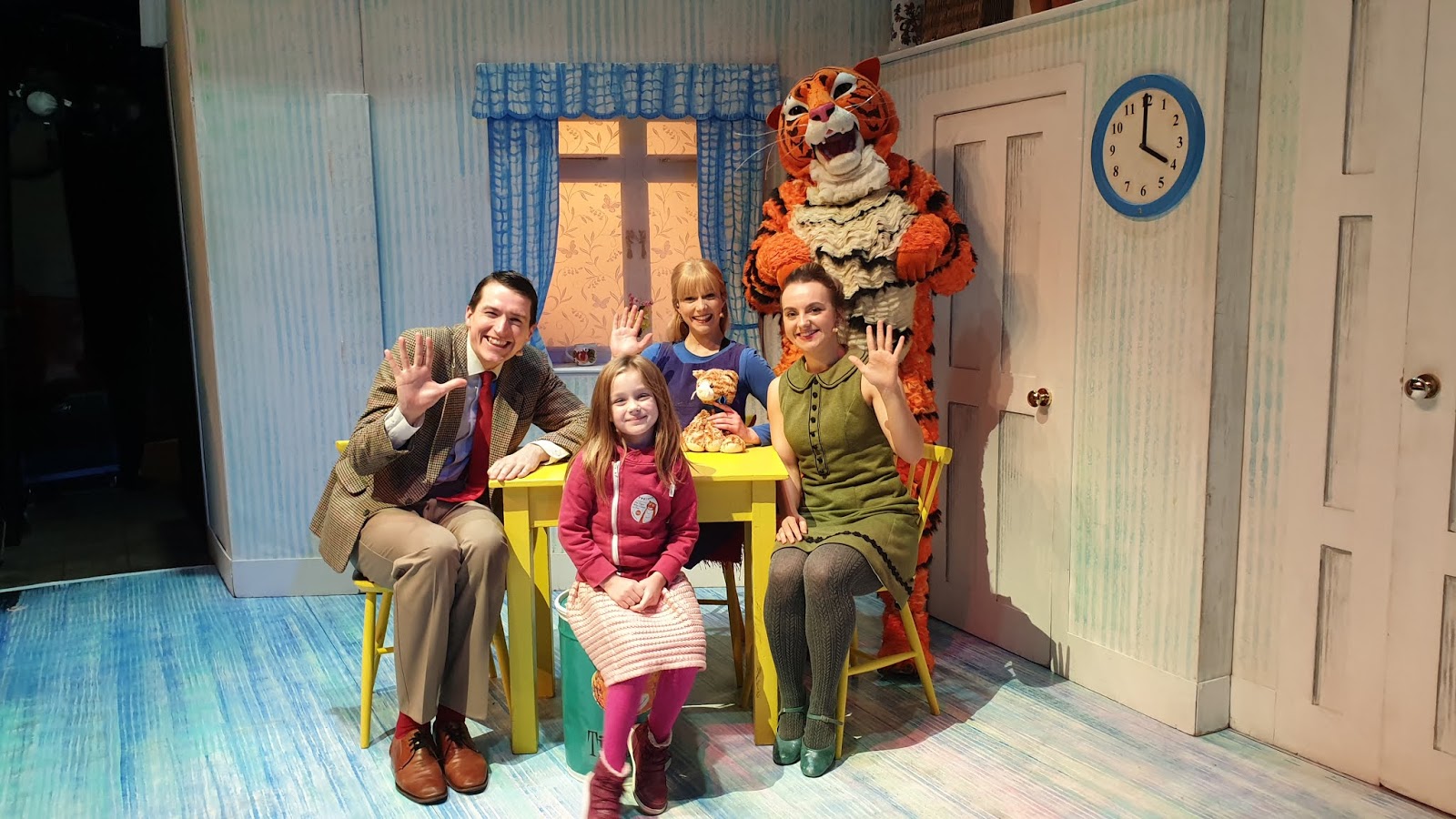 The Tiger Who Came to Tea is of course one of the most loved Judith Kerr books and will fit that nostalgic spot for many parents too. I can understand why kids love her stories so much, they are simple and absurd and delightful - I found the play enjoyable to watch.

The show was fun and interactive. The audience was straight away sucked into the world and kids loved participating in the show, talking back to the cast, pointing out things for them and interacting with the stage. There were great many laughs with the slapstick humour that is so universally pleasing for kids. 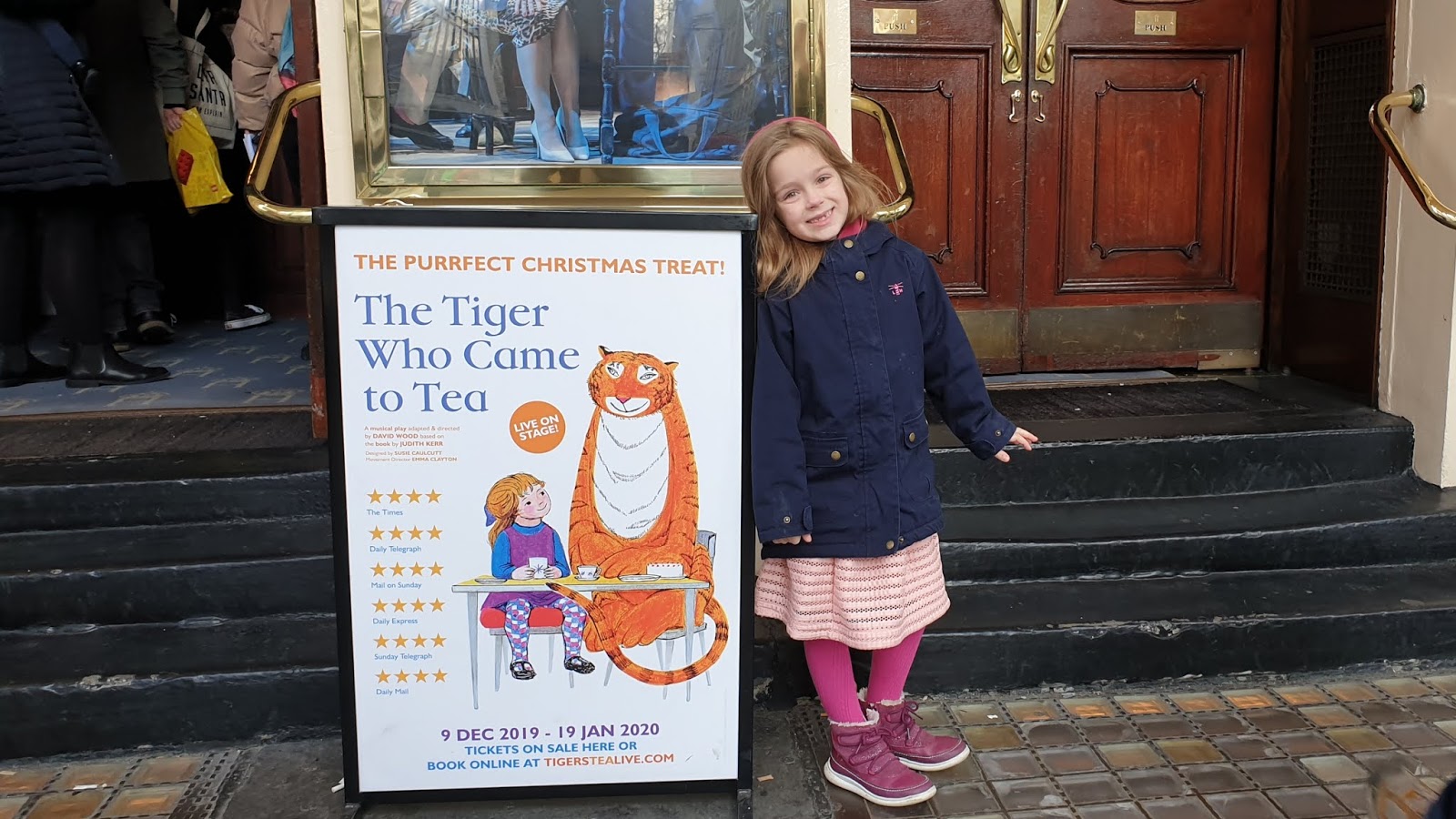 Both my children were mesmerised by the show. My six year old told me it was "probably the best theatre show I have been to". She took great delight in the interaction and was roaring with laughter with all the jokes. The 18 month old loved it too, although found the tiger too scary to stay in her own seat and at times, even to watch the show. The tiger and the play are categorically not scary, but all the audience interaction and the noise that amps up when the tiger comes on stage can be a bit much for the tiniest theatre goers.

While there is no interval, there was a very welcome interactive and physical break in the middle of the play. Showing consideration towards the young audience, the play had a built-in break so to speak. The actors encouraged the audience to get up and join their dance, stretch their arms, and march their feet. The audience was also taught a song, and asked to sing with the cast. Particularly handy if you've got toddlers, who start to fidget sooner or later, but also pleasant for the older kids. 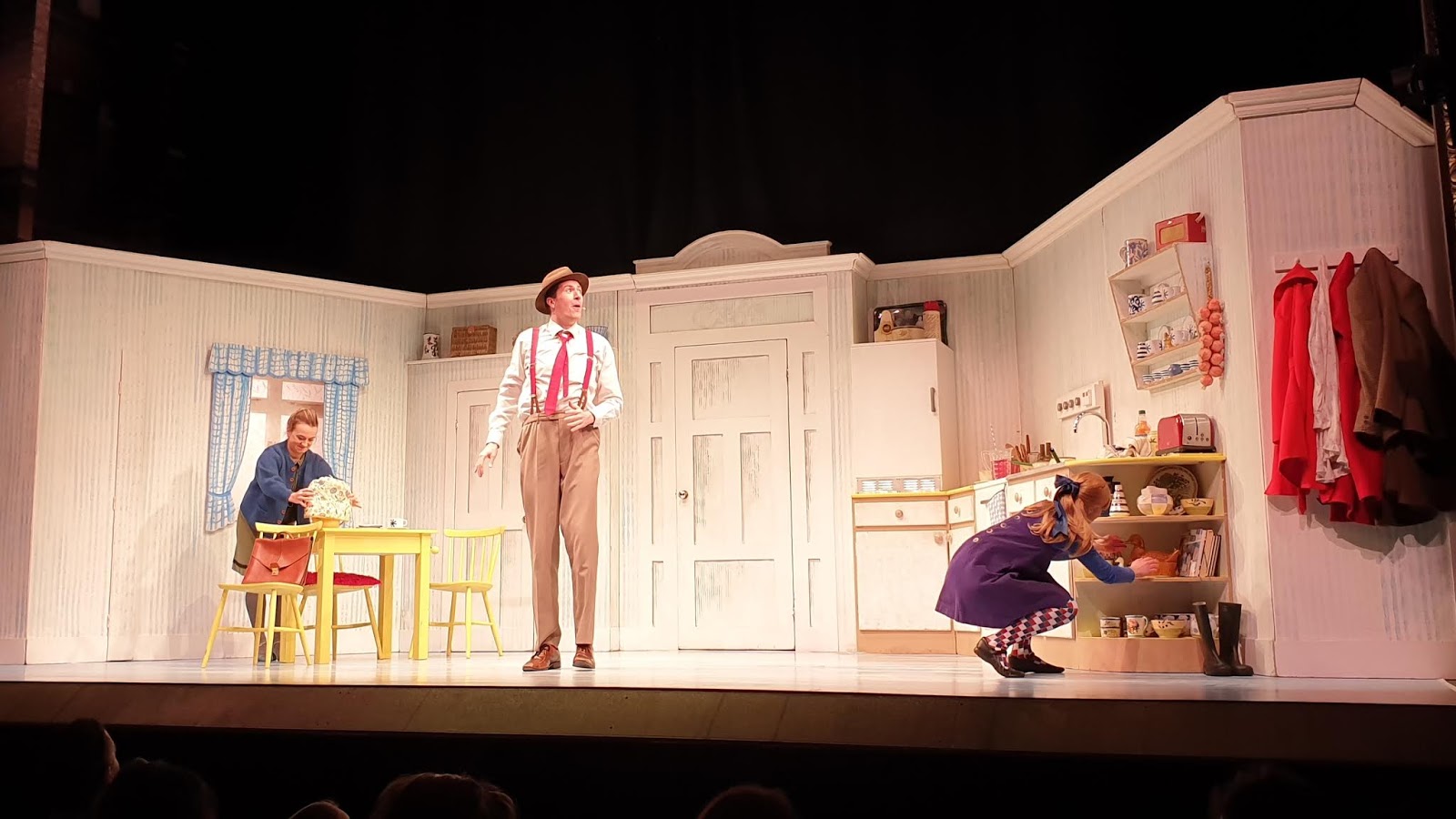 The London show was at Theatre Royal Haymarket. It is at a central location and easily accessible, the closest station is Piccadilly Circus. While it is an older traditional theatre, the bathrooms were clean and modern, and had a baby change facility as well. As usual, the seating is quite tight so at winter time having big bags and coats is a hassle. The cloakroom is £0.5 if the attendant is present. If you've got very little ones keep your eye out for those plastic seat elevators so they can see better, the theatre has some of them.

If you have young kids you may also be bringing a pram but you can't take it in the theatre due to space. There is a buggy park right before you enter the theatre to get your tickets and staff will direct you there. You may be asked to fold the pram. If you are bringing a pram you might also like to know that Green Park, which is about 10-15 minute extra walk away, has step-free access. 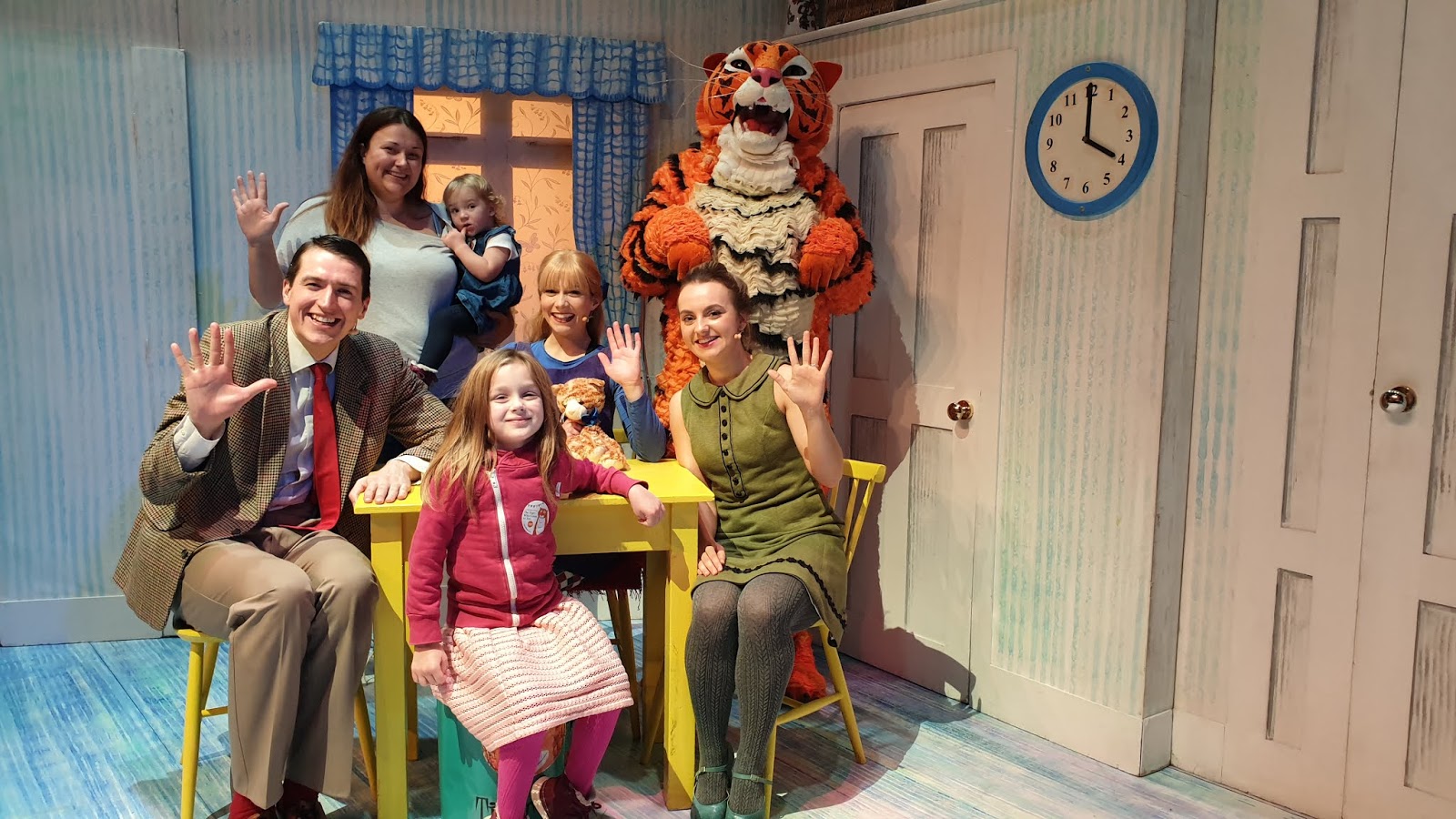 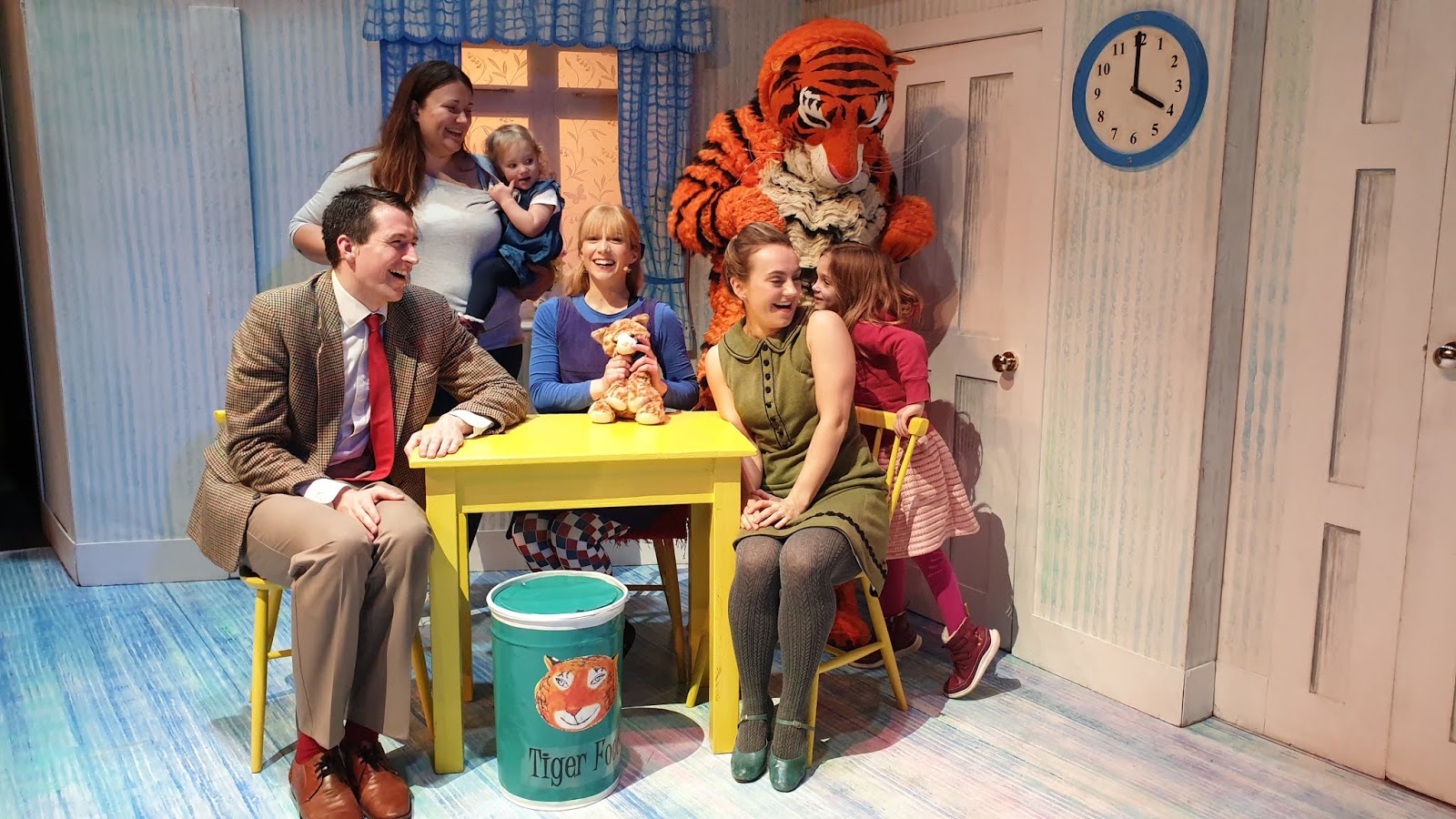 The show is showing in London until 19th January 2020 after which it will tour UK up until May 2020. Tickets can be bough at tigerstealive.com or Box Office 020 7930 8800. It is definitely worth the visit if you have young children - both my girls were mesmerised by it!

What theatre shows have you taken kids to?

You might also like: Our review of the Very Hungry Caterpillar show and Our day with the dinosaurs in London: Dinosaur World Live