My honest thoughts on the Science Fiction exhibition at Science Museum

I went to see the new Science Fiction exhibition at the Science Museum in London. This new "immersive, genre-defying" exhibition is running until May 2023. In the Science Fiction: Voyage to the Edge of Imagination exhibition you take a journey through the cosmos and learn about the interaction between fiction and science. In this review I will explain what the Science Fiction exhibition at Science Museum was like, what I thought was good and what could be improved, and its suitability for kids.
As an overall summary, the exhibition was quite interesting, if a bit on the dear side. I loved the interplay between reality and science fiction, and there were certainly quite a few exhibits that inspired deeper thinking about this. This exhibition is most suitable for adults, who will get the most out of this one due to many many pop culture references.  As for kids, I would pitch this more towards older tweens and teens. 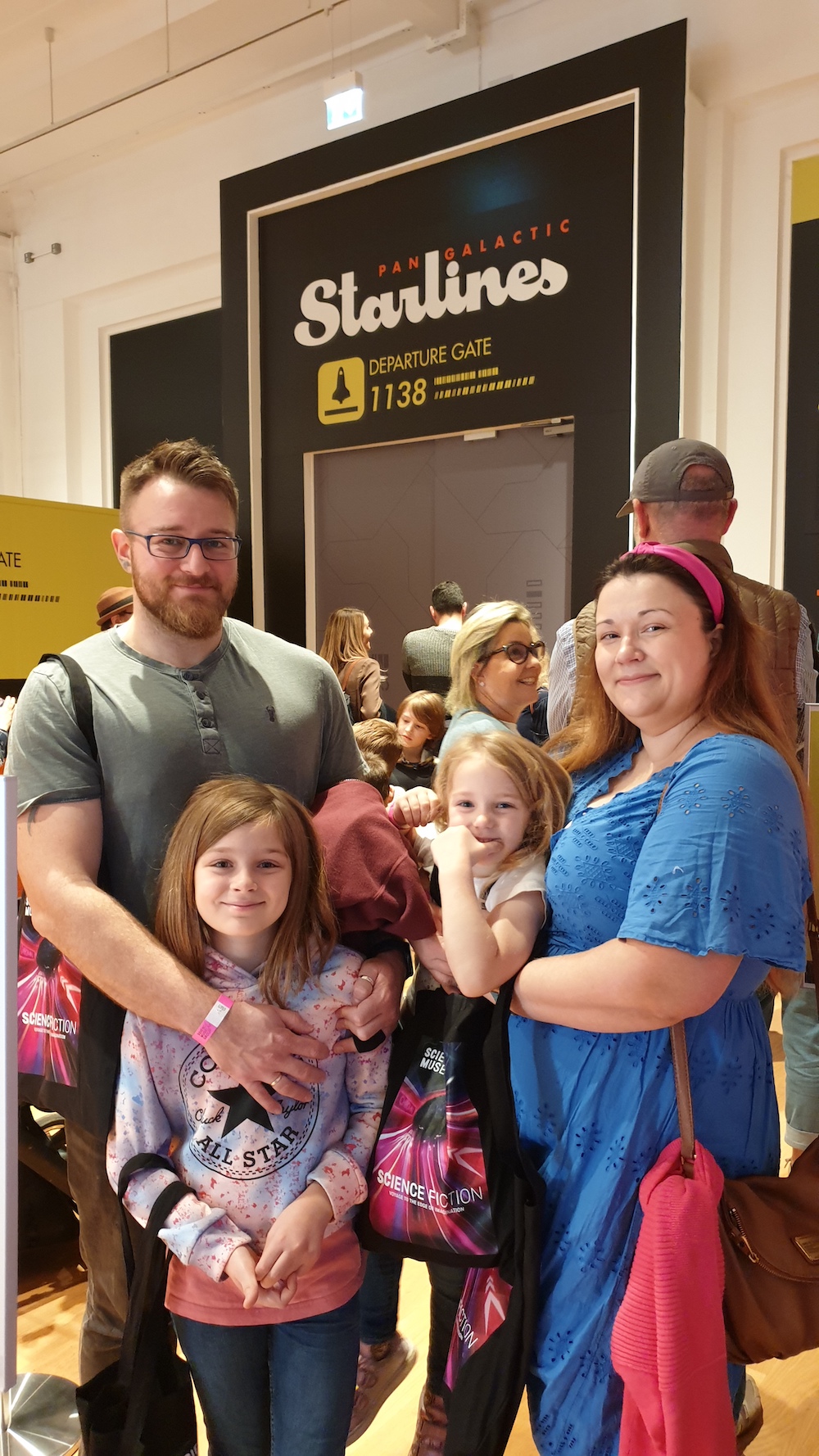 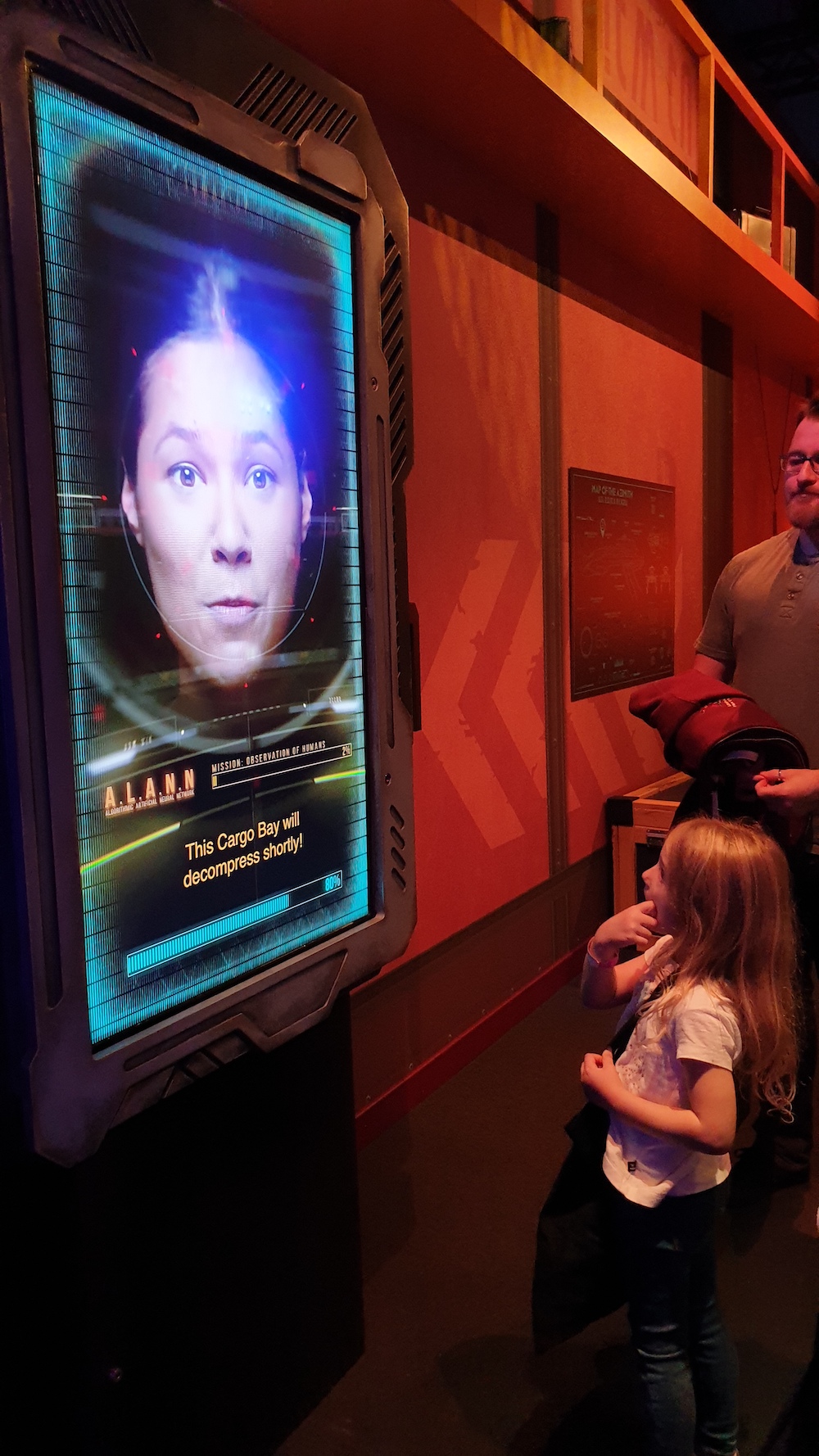 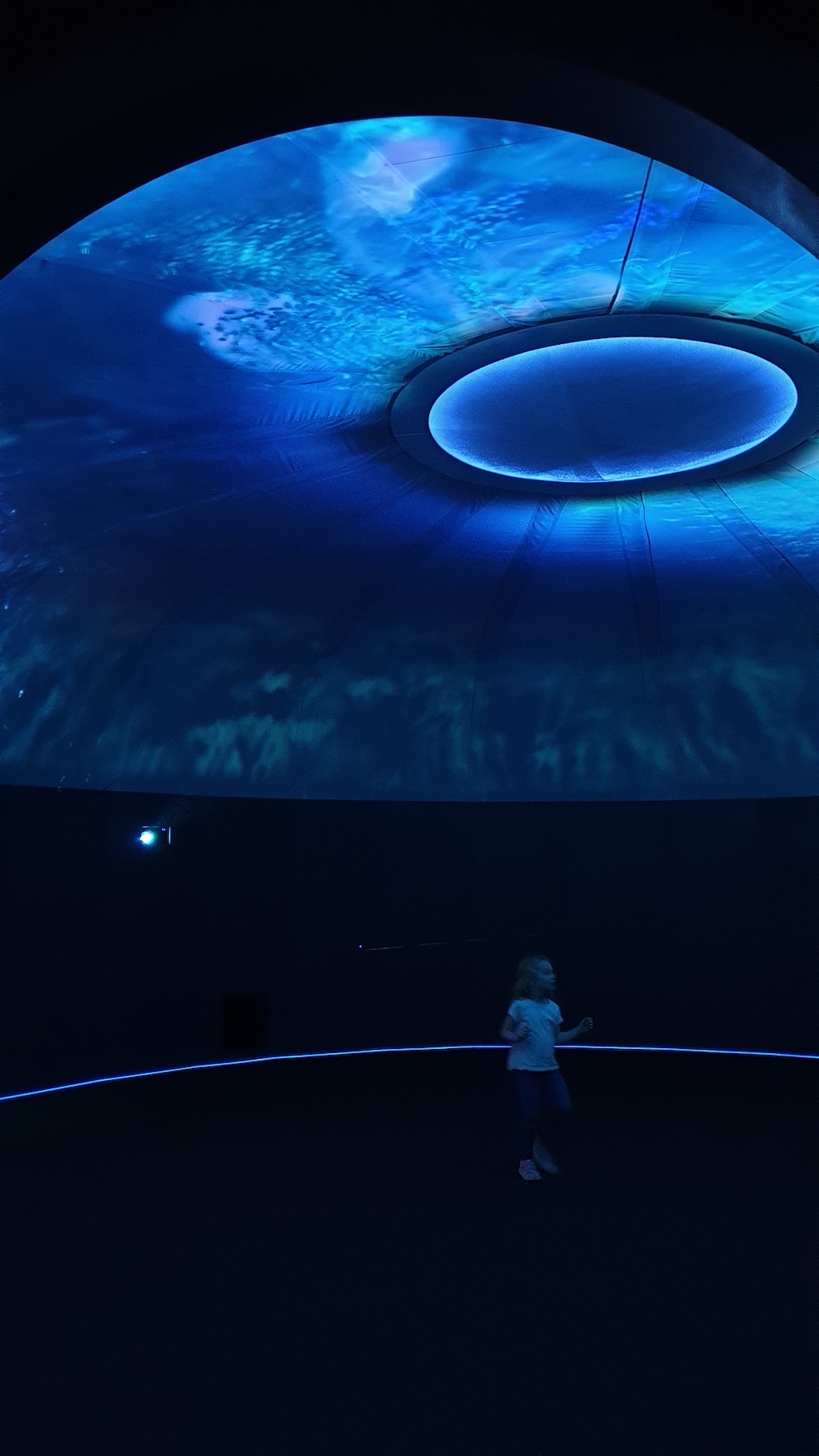 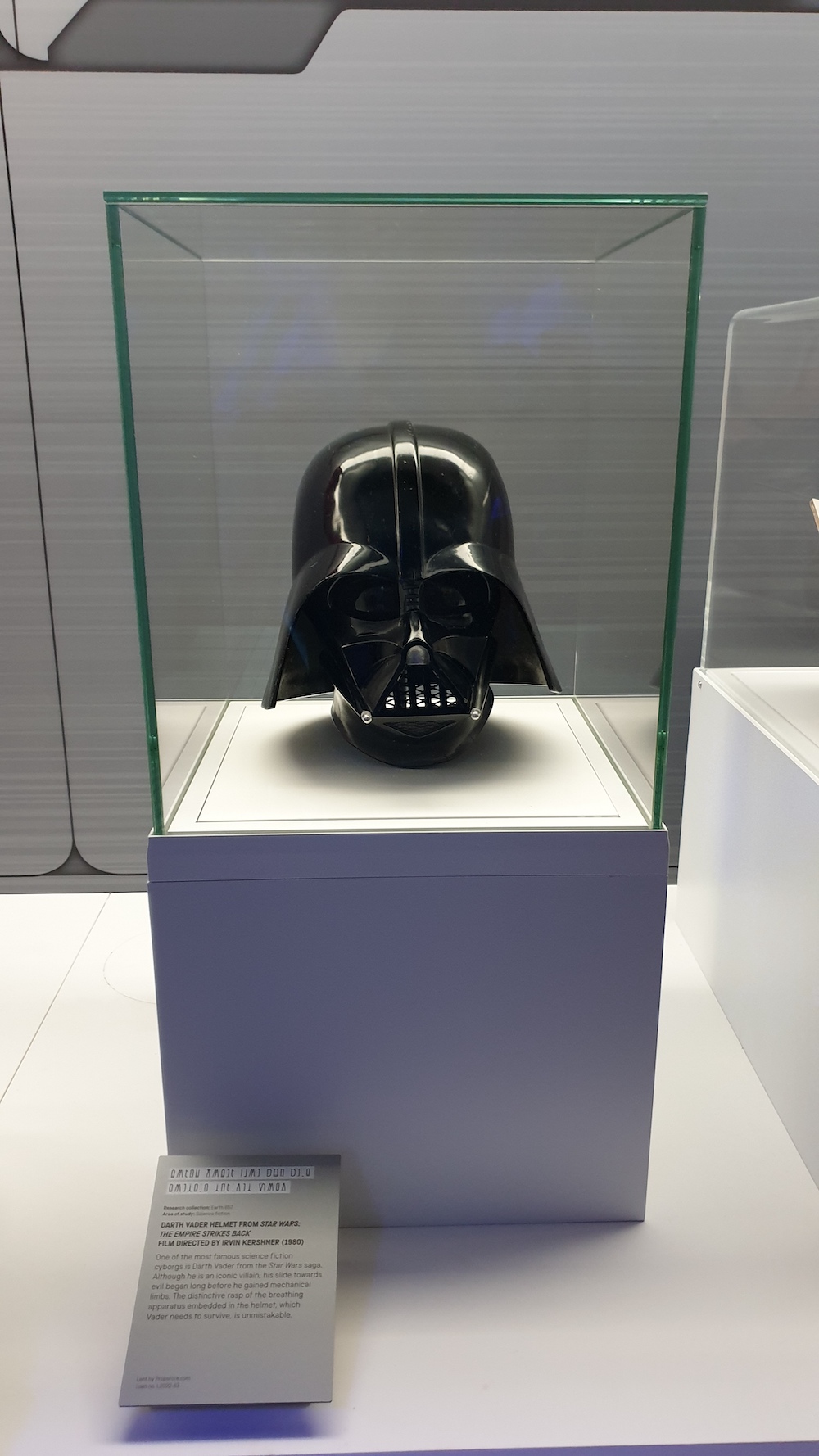 Review of the Science Fiction: Voyage to the Edge of Imagination

The Science Fiction exhibition at Science Museum launched early October and is running until 4th May 2023. This exhibition promises to show you how science fiction interacts and inspires science and discovery, and also promises a genre-defying immersive experience where you journey through cosmos on an A.I. guided spaceship... so, that begs the question - how did that all work out?

What was the Science Fiction exhibition at Science Museum like?

An exhibition space styled like a spaceship, with the assistance of a slightly glitchy A.I. and a fantastic selection of various film props and scientific equipment, showing the interlinkages and feedback loops between real life science and fiction. Lots of great things to spot from popular culture, like the hypersleep pod from Prometheus, Darth Vaders helmet and a Dalek amongst others.It is a bit more on an expensive side for the length of the exhibition, but quite a unique and interesting setting and some really fascinating themes shown around various sci-fi themes. I particularly liked how the exhibition showed the links from science fiction to real life science and back. There were some stand-out sections, such as bionic engineering, fashion / film influences and real-life testimony of using bionics from a meningitis-survivor and Youtuber Tilly Lockey, combined with film prosthetics, like Darth Vader mask... There were linkages shows between hypersleep pod from the Prometheus, and cryotherapy, gene editing and Gattaca, and androids from films such as I, Robot linking to original science horror Frankenstein. I was also fascinated by the section on black science fiction.
The exhibition took place within a "spaceship" so we started our journey with a blast to space, with airport style queue-in and then a lift-off. The exhibition then took place inside the spaceship. We were also treated to various interactive screens, and large observation rooms, such as the last room where we could sit at the deck and admire Earth from space. It was really interesting and added to the experience. All in all, a very interesting setting for a thought-provoking exhibition.
And like from any international or intergalactic flight, you exit via the tax-free gift shop... Well, tax-free not this time, but very well stocked for the science fiction buffs! Lots of fun and quite unusual gifts and items to check through. 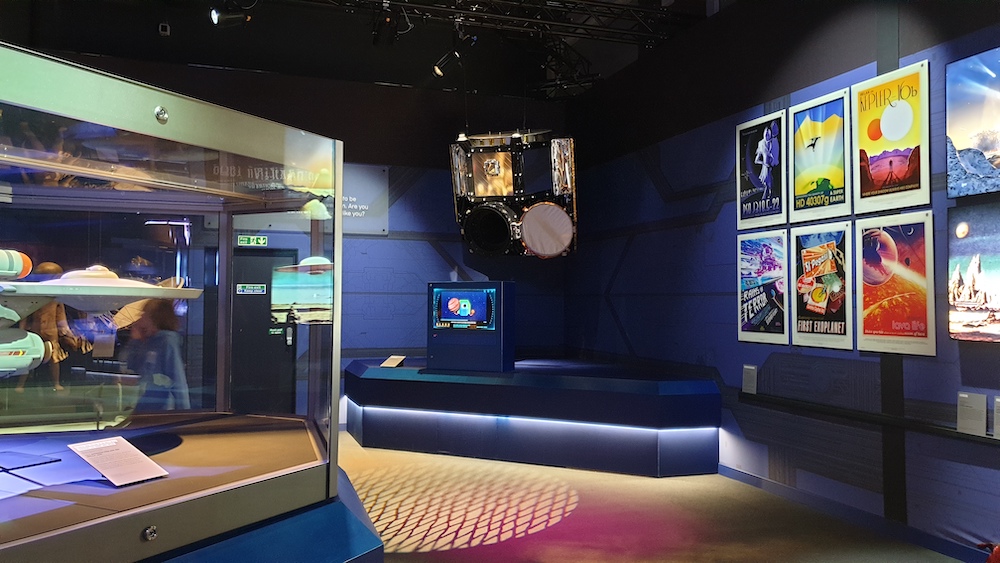 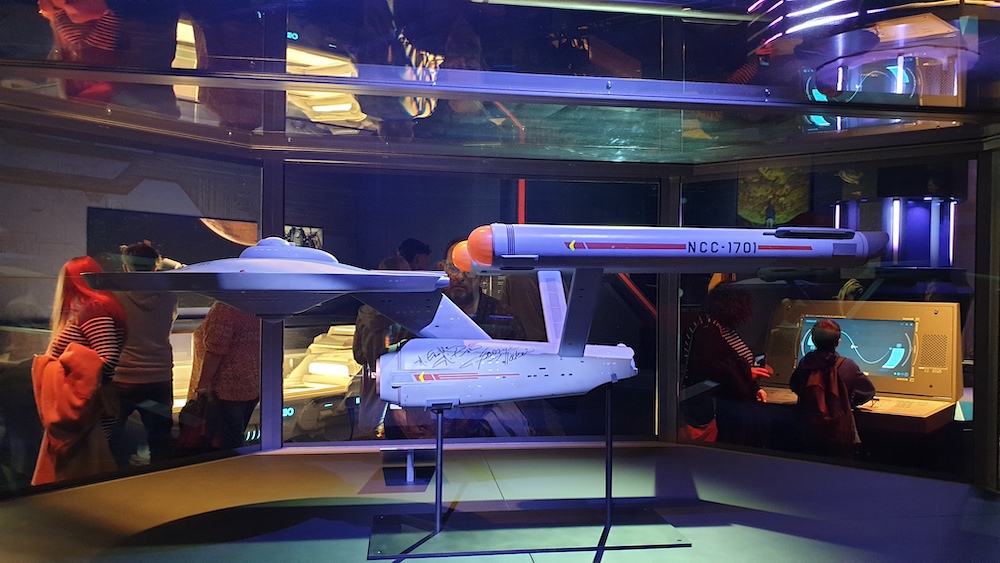 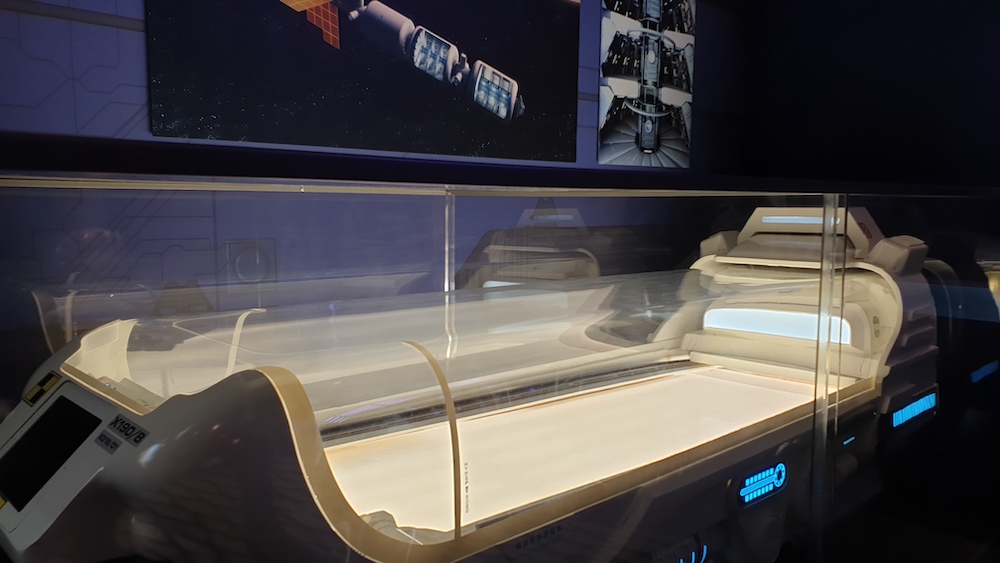 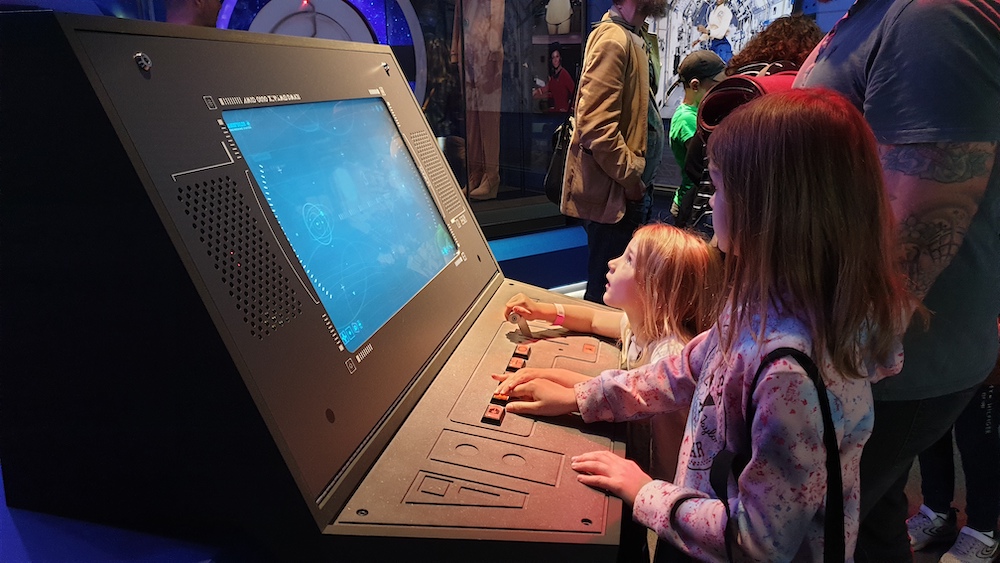 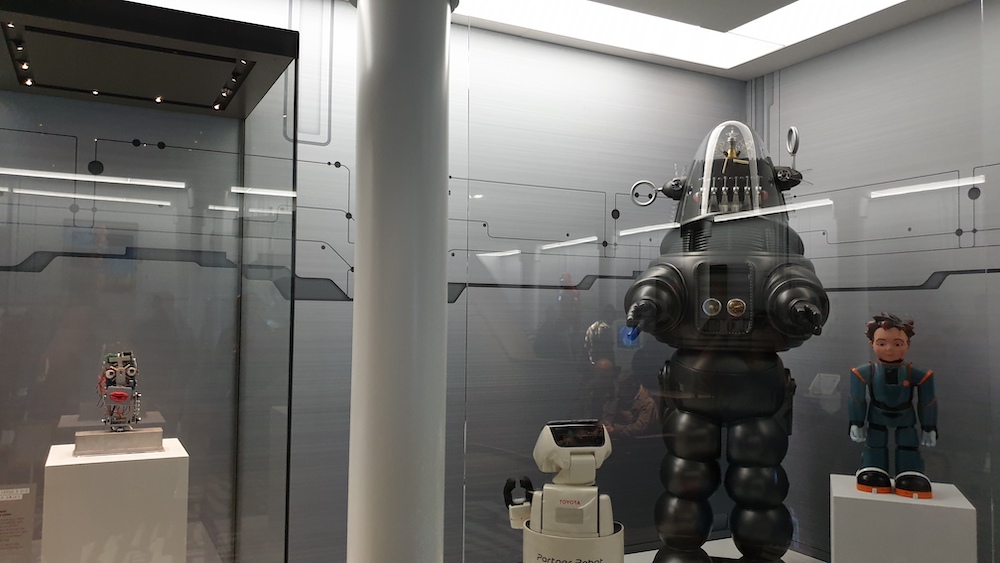 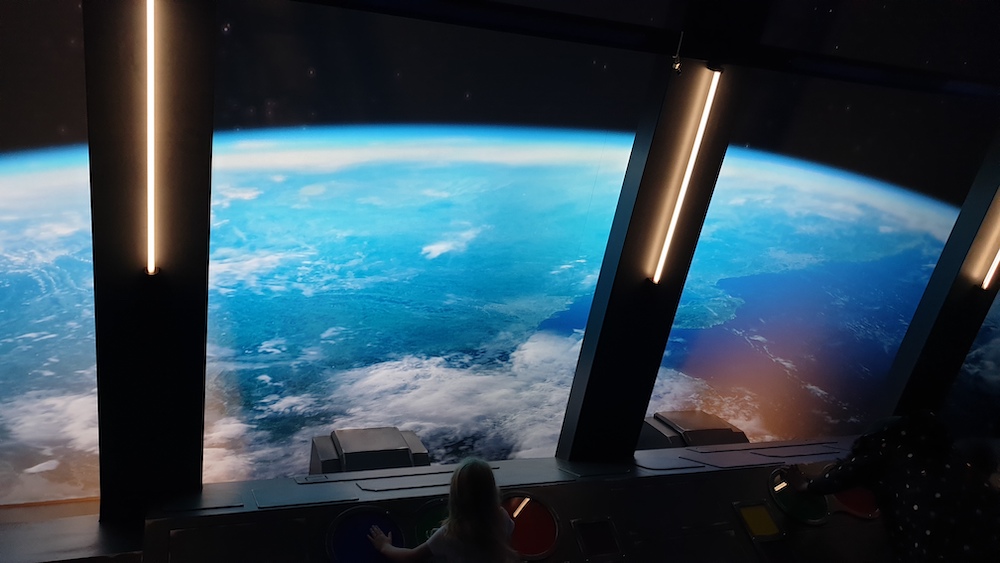 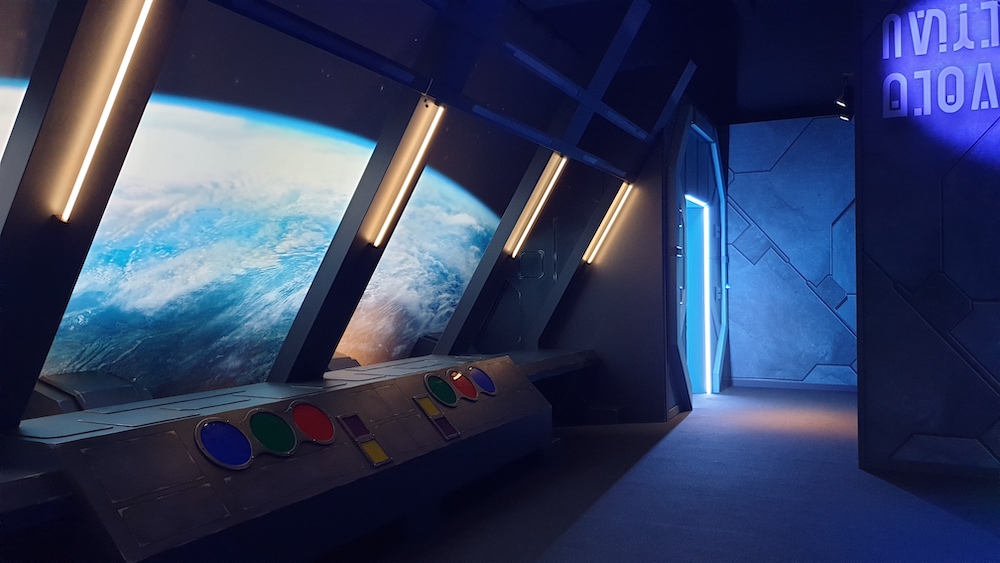 Age recommendation for the Science Fiction: Voyage to the Edge of Imagination exhibition - suitability for kids?

The age recommendation for this exhibition is 8+ but truthfully I would say this really works much better for kids in their teens. There were many pop culture references and film props from films and vast majority of these films are not ones that would interest primary school aged kids, or even slightly older kids. This is compensated partly by free tickets for kids aged 7 and under!
Some of the extra interactive bits did help in keeping my kids in one place for long enough for me to read bits and bobs, and they did seem to enjoy a lot the overall spaceship experience. Mostly however, my kids were speed-walking through much of the exhibition, making it difficult for me to properly enjoy it, so I'd quite like to return in adult company only.

Was the Science Museum exhibition Science Fiction worth it?

Overall I really liked the Science Fiction: Voyage to the Edge of Imagination exhibition, although the cost of the tickets were fairly pricey for the length of the exhibition. I may have felt differently had I had a child-free day and taken my time... As far as the overall experience and the spaceship setting, it was fun, different, and an interesting idea for immersiveness. I liked it, although not sure I'd pay loads extra for that only. I also wish that more of the film props had been the original film props. It would have added to the curiosity-side of the experience. That said, I liked it and I reckon I will do another visit in the spring time without the kids! 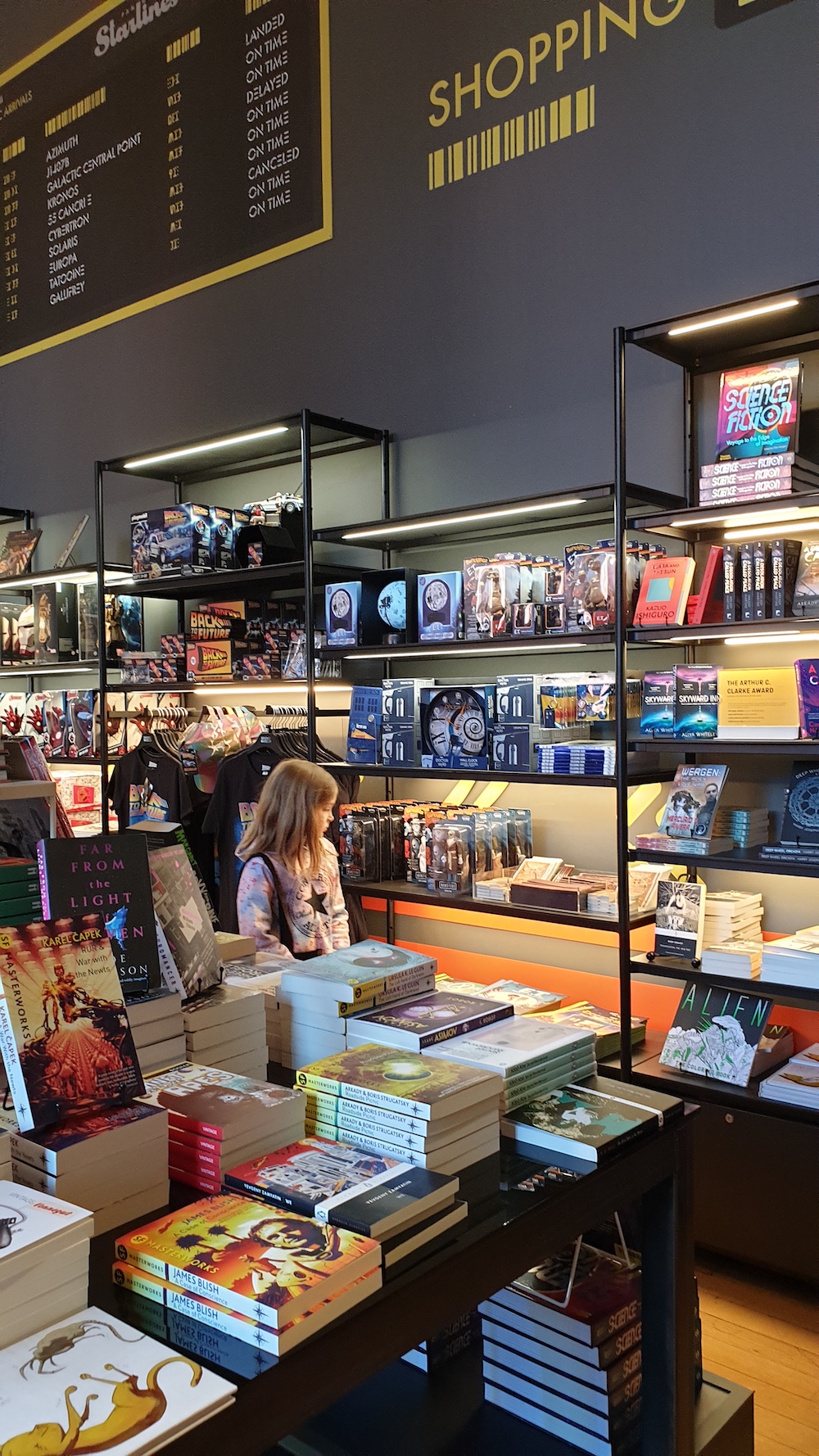 And afterwards, I'd definitely recommend heading down to the ground floor an continuing the space-themed outing by seeing the regular exhibition and the many fascinating items such as the Soyuz descent module, Apollo 10 command modules or the real piece of moon rock!
Anyone else been to this exhibition?
You might also like: Why visit the Science Museum London with kids? 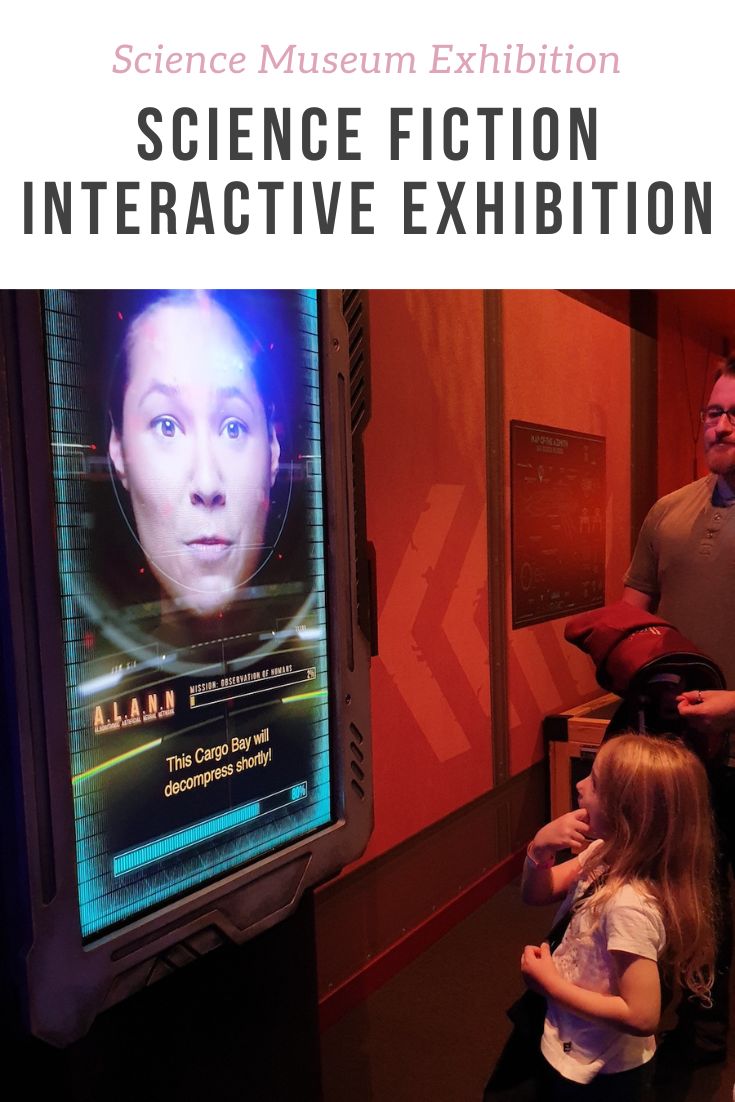 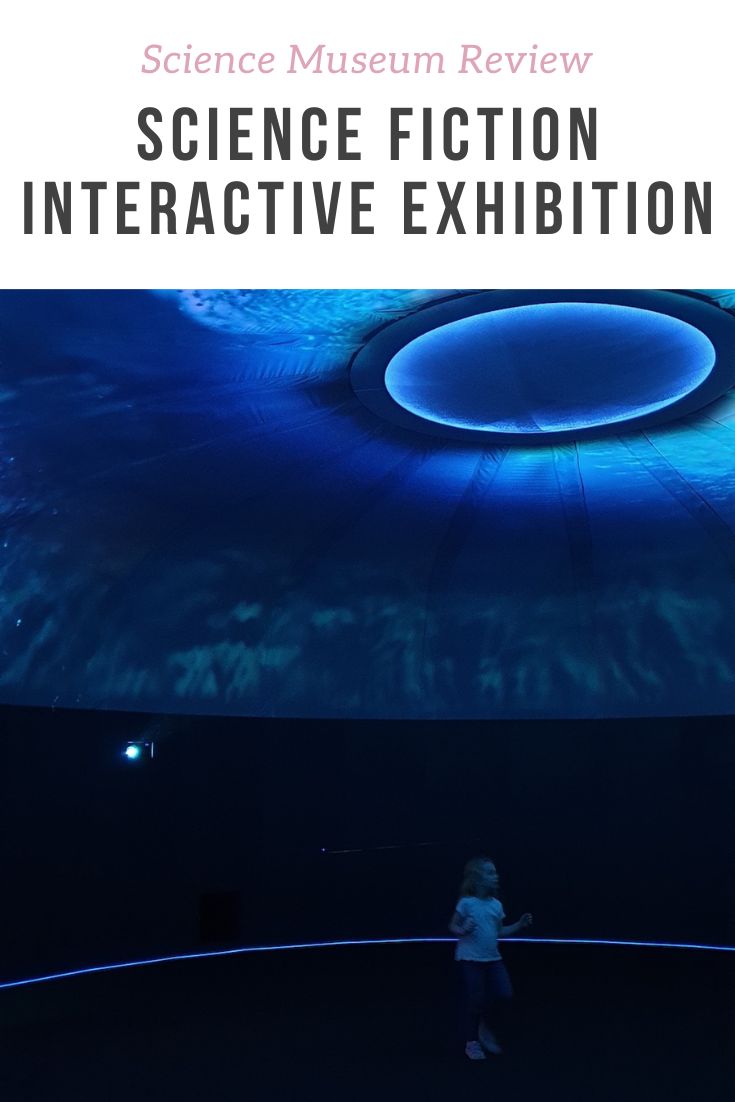