If you've never heard of the Secret Cinema, the best way to explain it is to say it is a London-based immersive theatrical experience based around a film. You dress up, you get ready, and at the event you engage with the setting and the actors as much as you want (but no-one is going to force you if you rather not).

This spring the film chosen was the sci-fi cult classic Blade Runner. I thought I'd share a quick review of the experience, and a couple of tips for anyone attending it in the future - all spoiler-free of course! You are not allowed to use your phone inside, so photos are from outside only. (I wouldn't want to spoil the surprises for anyone attending, but once the run is over in July I might update this post with a more detailed description!)

I've never been to Secret Cinema, have wanted to go for years, but never got around to it until now. In fact, thanks to a friend on Facebook who posted how they were waiting for the ticket website to open, made me impulsively buy tickets the same day. Blade Runner is a cool film, and I was excited to see what kind of a treatment it got. 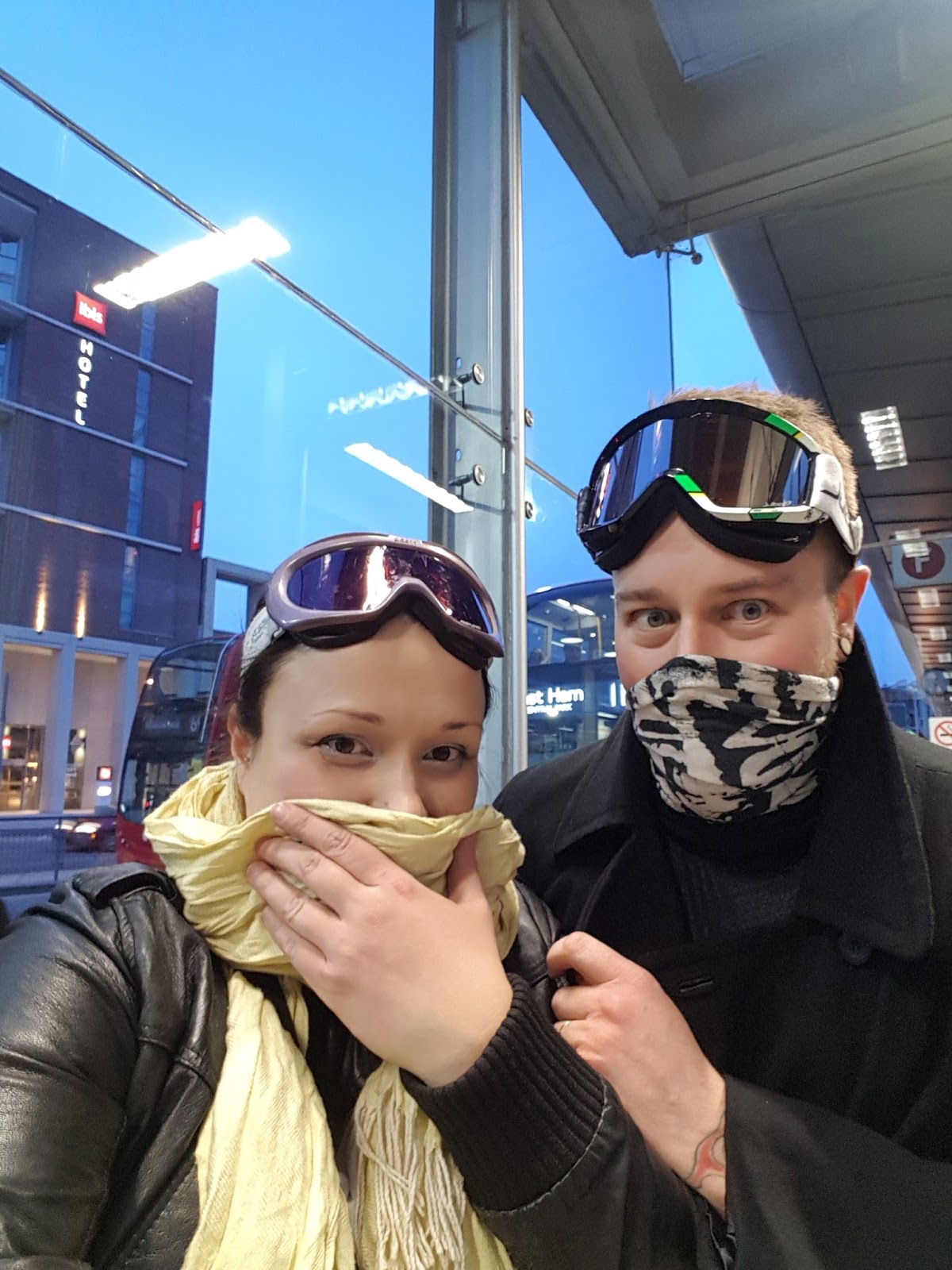 The whole experience and the setting were just fabulous. I loved the attention to detail, from futuristic food and vending machine snacks to the variety of actors mingling with the audience. As soon as you got through the gates you are transported to the Blade Runner world and were treated as your character. As part of the online process, you get assigned a character (we were scavengers) and your entrance and treatment in the world is dictated by that. All the actors and staff stay in character and help you get into the atmosphere.
As we got in the venue the actors directed us to do a few activities to get in the mood. The venue was fantastically decorated, exactly the way you would imagine the streets of Blade Runner world be. There was something to look at everywhere, stalls and rooms to explore, and acting and dancing scenes to watch. It really was quite spectacular. And interestingly, the website states that "Check meteorological forecasts before heading Downtown. High levels of rain may occur. Please dress appropriately". Just to say, when Secret Cinema says something, they do mean it. In addition, during the film, actors enact the scenes around the screens, which adds interest to it.

The world was really fantastic and I loved it. It felt like we were in Blade Runner. 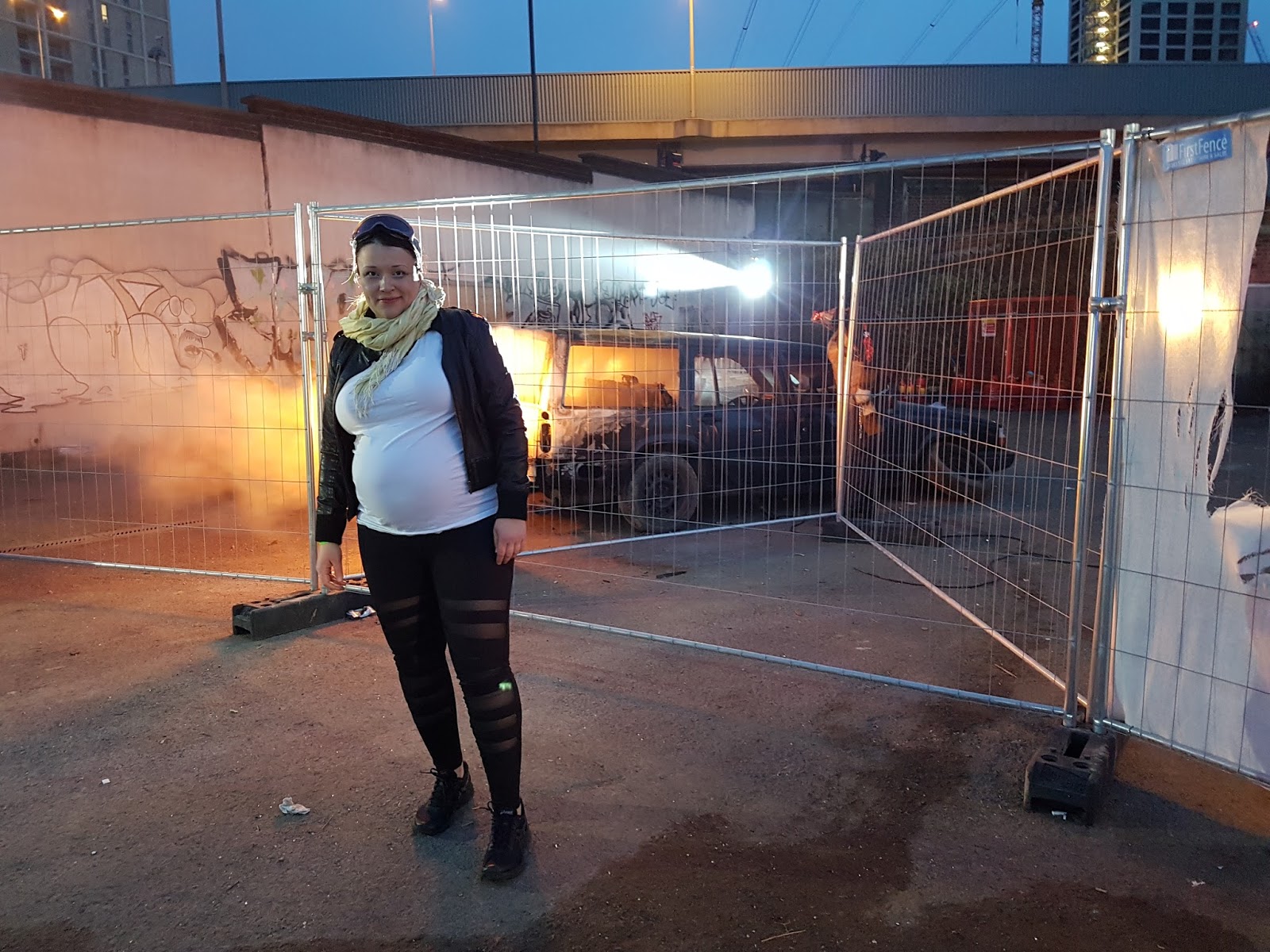 The only bad but unfortunately a very big point was that watching the film was not enjoyable - and that's a big part of the whole Secret Cinema experience.

Throughout the film the bars remained open. The one at the main venue was right at the back of the seating arrangement behind a curtain and as people were there sitting, drinking and chatting it was so noisy it seriously distracted from the movie, particularly the quiet parts. The sit-down bar should be located at a further distance, maybe on the other side of the venue or in a separate closed room. Additionally, perhaps because we went there on a Friday, it was much more geared towards drinking and some people in the audience were getting tipsy and disruptive during the film.

Even worse, the seats were incredibly uncomfortable. I am 5'7 or 5'8, and I was finding it difficult to fit in the tight space between the benches. I felt pity for the men in the audience - there were lots of big blokes around. Now, you get what you pay for - if you went for the VIP seats they looked very luxurious... But the cheapest and the middle range ticket seats looked about the same level of uncomfortable. 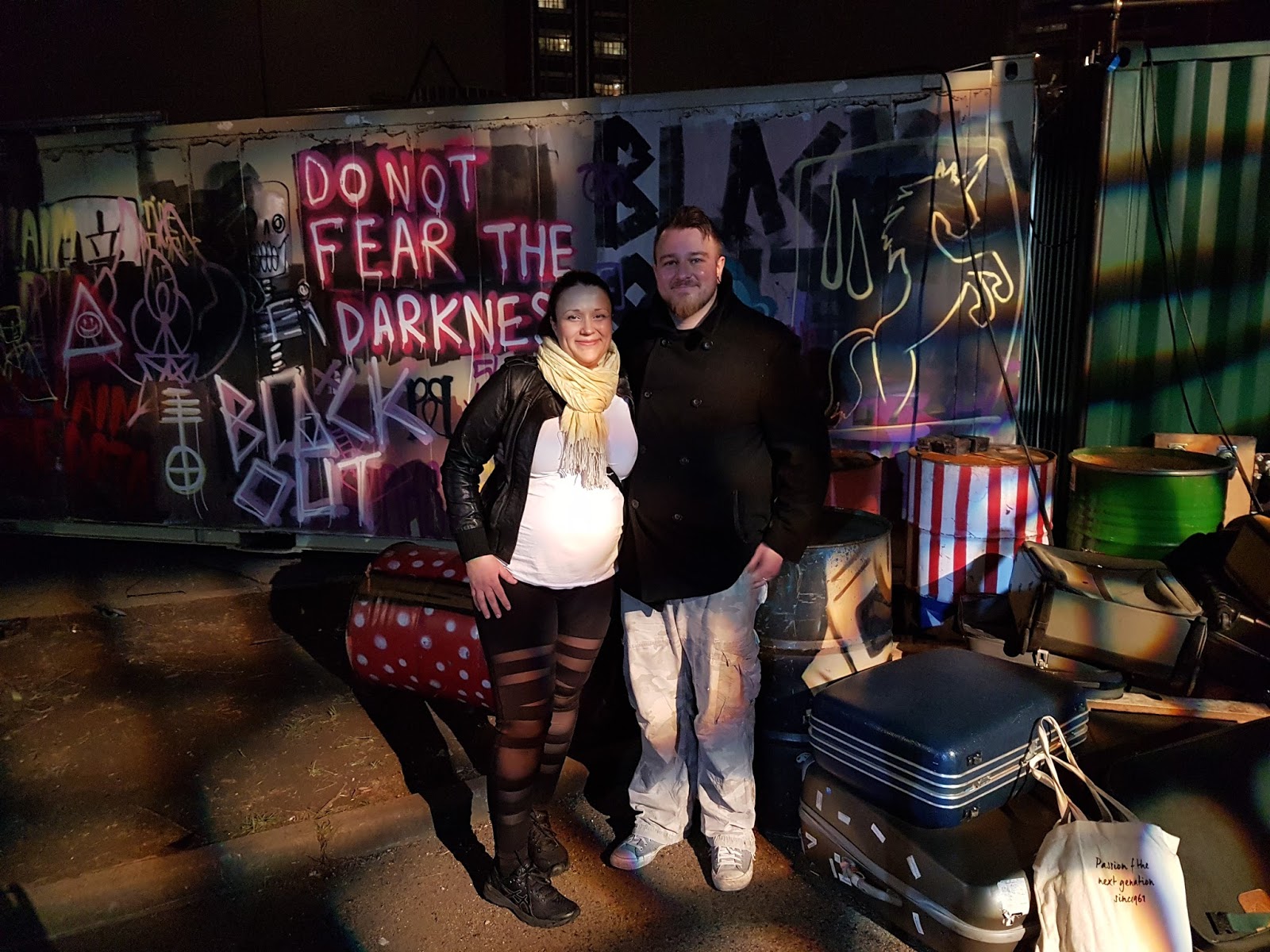 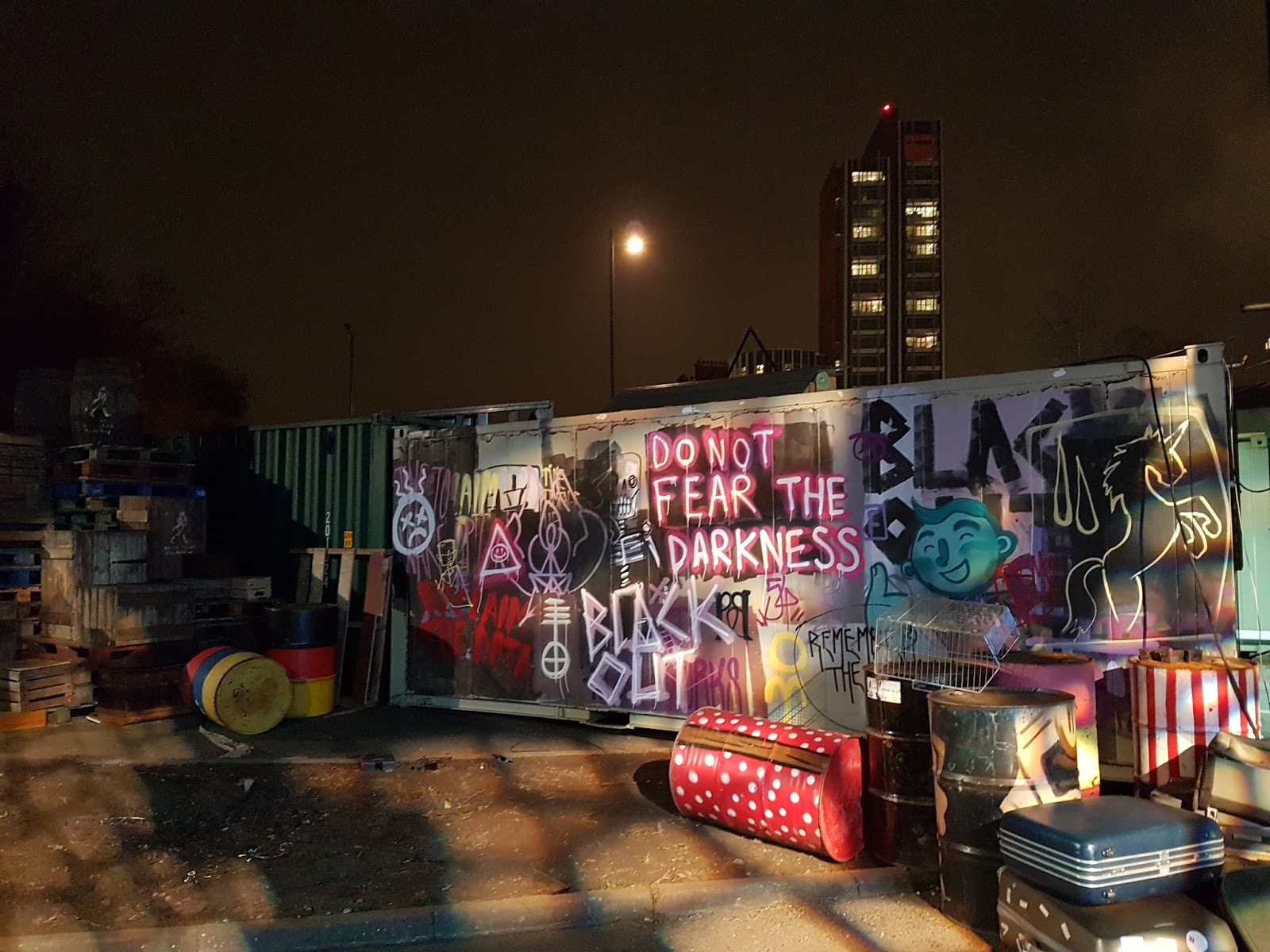 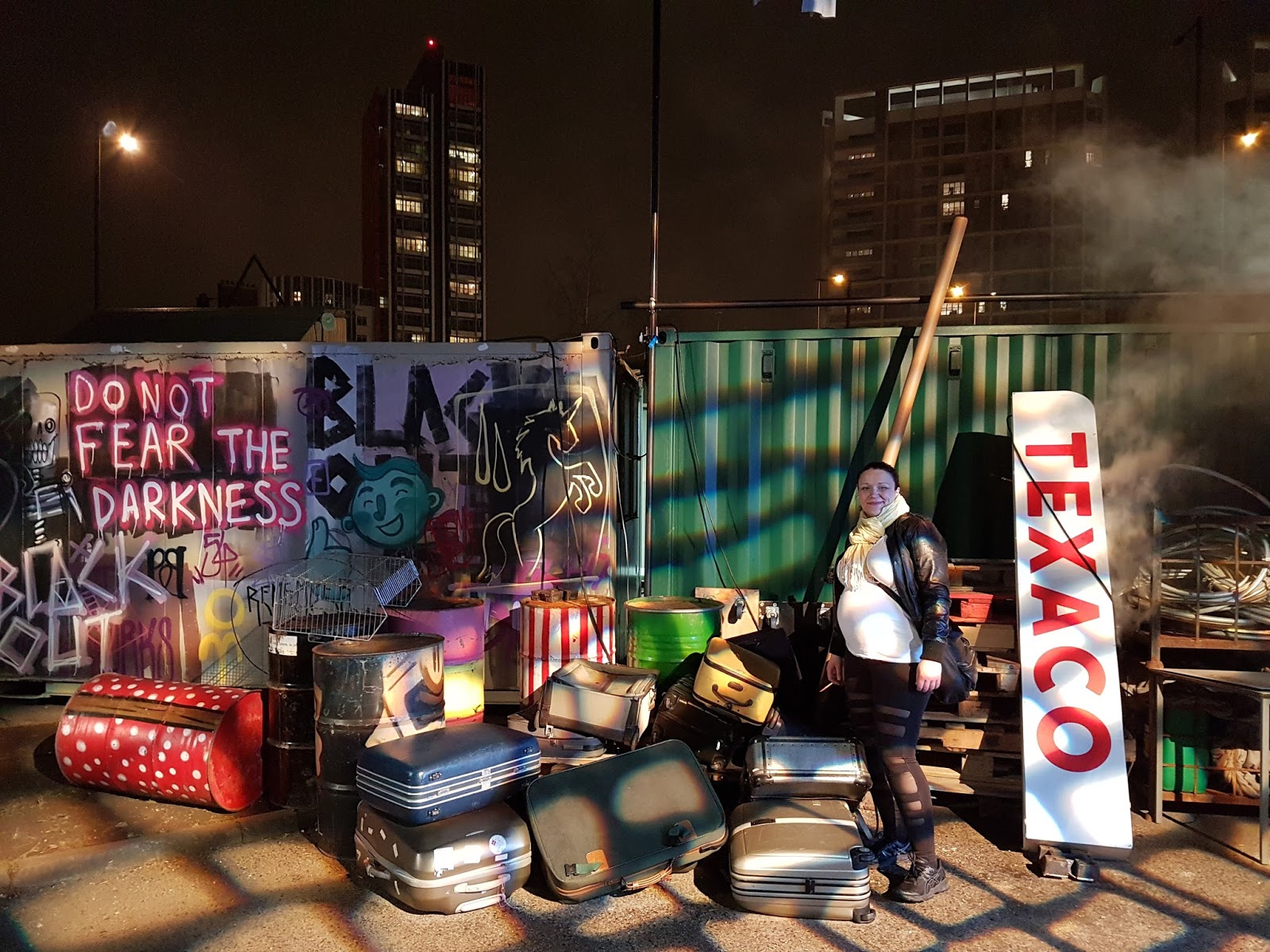 Would I go again then? And did I think the tickets were worth it?

Like I mentioned, we got the cheapest tickets, which were on a weekend night about £75 per person. So yes, pricey. In addition we spent about £40 on food and drinks. Drinks were about normal London bar prices, food was on the expensive market stall prices, think Borough market.

As for outfits, we scavenged what we could find from home so didn't spend anything but you can go as full out as you want obviously. And many people did. And if you feel like spending a bit more, the venue has a shop and vending machines with some key items! Like those see-through umbrellas and raincoats you might need in the future world of sudden acid rains...

There are different ticket price levels - the cheapest (weekend prices) were £75 and the most expensive £150. I felt the cheapest tickets were alright, I didn't feel like we missed out on anything crucial. During the film there was at least one scene that was enacted only for the holders of more expensive tickets, and obviously some areas were restricted to more expensive tickets, but  there was plenty of everything else going on we didn't even notice it.

After the film during the weekend there was also an extended after-party, which meant the dance floor was open for another hour and a bit after the film. However, as the location was in Canning Town and we wanted to get home using the train we had to leave well before midnight.

Overall, yes, I thought it was a brilliant night out and I would definitely go again! It was pricey, but well worth the experience.

I for one can't wait till they announce the next one!